Nothing like starting a new school in a new town in the middle of September on a Wednesday. I leaned on the bus window and breathed through my mouth to escape the aroma of vinyl and exhaust, trying to memorize the route to school. It was no use. I’d be helplessly lost without GPS, so I prayed my phone would have enough service to guide me home if I decided to skip out early.

My vintage Jansport with the rainbow patch occupied the seat next to me. I gripped its strap protectively. Who needs a friend when you have a backpack that smells like your childhood? Charcoal burgers and chlorine. Cinnamon sticks and attic dust. Our new house didn’t have an attic. It didn’t even have a garage.

A tall guy with a baseball cap got on the bus. He looked like trouble. I opened my backpack and rummaged around inside like I lost something important—my home? my life? my sanity?—and hoped he’d walk on by. He did. When I looked up again, a girl was standing next to my seat. Short blond hair, pink hairclip, retro 80’s t-shirt. She had a cell phone in one hand and a yogurt in the other. We locked eyes, and I made a move to pull my backpack aside, offer her a seat, but then her gaze drifted to the back of the bus, and she said, “There you are!” in a relieved voice. Later, when I looked back, I saw her sitting alone looking at her phone.

We were stopped at a red light when I heard, “Watch this!” I turned around and saw Baseball Cap with an apple in his hand. He was lowering one of the windows. Outside, a girl with crazy curly brown hair and a small round Band-Aid on her nose was walking down the sidewalk. She had a leather satchel slung across her body and wore a long skirt and black combat boots. She was reading a book as she walked. With no warning, Baseball Cap threw the apple at her. Before I could hold my breath and hope it didn’t hit her, she caught the apple one-handed, took a large bite, then hurled it back at the bus. It smashed to pieces on the side. The light turned green. The boys around Baseball Cap hooted and hollered. The girl never took her eyes off her book.

It turns out, navigating a new school isn’t as hard as you might think. Looking for the library? Tail someone with a lot of books. Need the restroom? Follow the smell of perfume and vapes. Trying to get to the gym? Just swim against the stream of kids carrying violin cases. Math is math no matter what color the fake wood desks are, and the art of evasion is consistent across time zones: don’t engage, don’t make eye contact, look bored.

I kept my head down through my morning classes and spoke as little as possible, observing my new classmates from a wall of body language that I hoped said, “Leave me alone.” In English, a girl argued with the teacher about her grade in front of the entire room, then muttered “Freaking Communist” as she stomped back to her desk. A guy with smooth tawny skin and dark curly hair whispered, “Calm down, Shay,” but she shot back, “Shut up, Vik” and sneered at him.

For the most part, life went on around me, and no one paid me much attention until lunch, when Operation: Avoidance came to a screeching halt.

I’d been expecting a cavernous room of long, prison-like tables where I could slip into a vacant seat and eat my chicken salad and Cheetos unnoticed. Instead, this school’s cafeteria looked more like a coffee shop on a Sunday afternoon. Small tables of different sizes and shapes crowded into a space that wasn’t designed to accommodate them. Students filled most of the chairs and stools, while some lounged on the tile floor, picnic-style. Every table with an empty chair filled quickly as more students arrived, fist-bumping each other and sliding into seats they’d obviously claimed weeks ago.

Every table but one.

At a small round table near the recycling bins sat the girl who caught Baseball Cap’s apple. Next to her were two empty chairs. I tightened my grip on my lunch bag and walked over. The girl was eating a bowl of noodles and reading a book, but she looked up when I approached. The Band-Aid on her nose was gone, but now there was one on her chin.

“Sure. Thanks.” I sat down in the vacant seat just as an empty Coke can went flying over the table. It hit the rim of one of the recycle bins, then bounced inside.

“Yes!” Baseball Cap high-fived a fellow cap-wearer, then smirked in our direction. “What happened, Maggot? Nick yourself shaving this morning?”

The girl turned a page in her book, then said, “Better a nick than a celery stick, Mr. Brand.”

He rolled his eyes. “Freak.” On his way back to his table, his foot slid out from under him. To avoid falling, he grabbed the shoulder of a girl seated nearby, spilling her Smart Water all over her and himself.

“What did he slip on?” the curly-haired girl asked.

“What made him fall? Can you see?” She was standing up, craning her neck.

I squinted in the direction of the chaos. “It looks like a squished grape.”

“Hmm.” She sat down and made a note in the book, which I realized now was actually a journal. Then she closed it and turned her gold-brown eyes on me. “I’m Magdalena,” she said. “People I like call me Mags.”

I took my plastic container of chicken salad out of my lunch bag. Mags went back to slurping her noodles. No one ever sat down in the other seat. 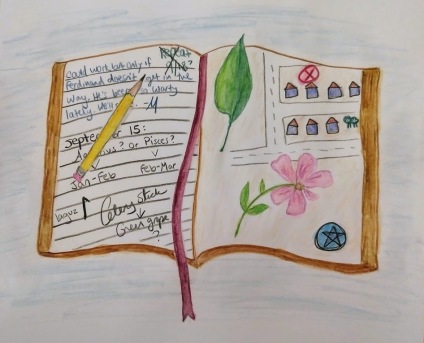 A few minutes before lunch ended, Mags shoved her empty bowl into a pocket of her satchel and closed her journal. “You’re new,” she said.

“Yep.” I licked Cheeto dust from my fingers. “Got any advice for me?”

I didn’t see Mags again until 8th period AP Biology. The teacher, Ms. Archer, gave a pop quiz. She said I could take it “just to see how you do.” My last school was obviously ahead of this one because the questions were easy. I breezed through them, then went back and marked two answers wrong on purpose. Pretending I was still working, I snuck peeks over my cardboard privacy screen, scanning the room. Everyone had their heads down, working, until I got to Mags. Over her privacy screen, her eyes were fixed on me. She raised her quiz paper, as if to study it closely. On the back, in large, loopy, capital letters, it read “LUNCH TOMORROW?” I gave a quick nod, then went back to pretending to work.

After school, I got utterly, helplessly lost. I couldn’t find my locker because I was upstairs when I was supposed to be downstairs, and then I accidentally exited out the back of the school, instead of the side where the buses pick up. By the time, I got to where I was supposed to be, bus #313 was gone. I collapsed on a bench, dug out my phone and opened my map app. I was still sitting there, trying to figure out which direction I was supposed to walk when Mags appeared before me.

“Not today.” I showed her my phone. “Can you point me the right way? I have a terrible sense of direction.”

Mags peered at the screen without touching it. “That’s where you live?”

Mags walked fast and talked faster. She covered everything from politics to plant species to the perils of popularity in the span of a block. I tried to keep up.

“The biggest problem with teenagers today,” she said as we rounded a corner, “is that they don’t think for themselves anymore. Bunch of guppies, all of them.”

She shook her head. “Sheep don’t eat each other.”

I didn’t know what to say to that.

“Someday,” Mags said, “I’m going to turn this school into a fish tank. Can you imagine how awesome that will be? Standing outside, tapping on the glass, while all these wide-eyed mouth-breathers swim around in each other’s poop fighting for the crumbs we throw on top?”

When we got to my street, Mags pointed out my house and said, “Think you can make it from here?”

“Yeah, thanks. For everything—walking me home, letting me sit with you at lunch, the advice about wolfsbane.”

Mags tilted her head and raised one eyebrow. “Of course. After all, what are complete strangers for?”

“So, how was it?” Mom opened the pizza box and set down three plates.

Justin stuffed a slice in his mouth and gave a thumbs-up sign. Mom cracked open her sparkling water and gave me a sideways glance. “How about you? Did you talk to anyone?”

Justin huffed, and a dot of tomato-sauce-spit flew out of his mouth. “Magdalena DeVille? She’s a witch.”

It didn’t bother me that after one day in a new town, my little brother already knew the ins and outs of not only his social circle but mine too. He’d always been plugged in to the gossip superhighway in a way I hadn’t, even at my most popular. I thought about what he’d said. Maybe Mags was a witch. I realized I didn’t care.

“Yeah,” I said. “She’s got some crazy idea about turning the high school into a fish tank.”

Mom and Justin froze, looking at me strangely. That’s when I heard it. That sound. That high, staccato sound that had been missing from my life for months.