If you’ve been following my blog, you know that I recently rescued a stack of old 70s and 80s board games from my parents’ house, and that has sent me on a trip down memory lane. Last week, I wrote about my life as a (wannabe) gamer and all the best games I remember from my childhood. This week, I’ve had the chance to relive some of them. My husband and I have been playing the games I rescued to see which ones are still fun thirty-plus years later, and it’s time to reveal the results. It’s important to note that the hubby and I are particularly interested in games that are fun for two players, so that was taken into account in our ratings. Also, don’t get too attached to any of these. Some of them are out of print. Others can be found used online in the $20-$60 price range.

Star rating system is as follows: 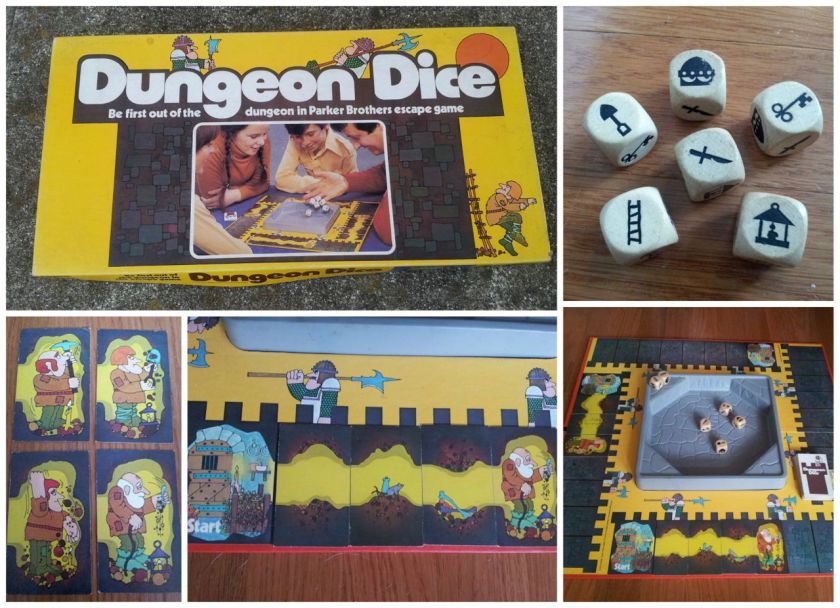 Year Released: 1977
Objective: Be the first to dig your way out of your dungeon cell.
Description: The instructions are similar to 10,000, but with some variation. Basically, you earn cards for your tunnel by rolling the dice and hoping for multiples of all the images except the guards, who you want to avoid. Cards can be taken away if you roll too many guards or if another player challenges you.
Rating: * * *
Comments: I was so excited to find Dungeon Dice! I had fond memories of it. I’ve always loved the dice with the cool little emblems and the choice of player cards. (My favorite is the old man with the spoon.) But it wasn’t as much fun as I remembered. It took a long time to play (even with only two people) and the instructions were a little confusing. I think it could be more fun if they were modified a bit.

Year Released: 1978
Objective: Isolate the other player’s piece before he/she isolates you.
Description: On each turn, you move your piece one space and punch out one square of the board until one player can no longer make a move.
Rating: * * * *
Comments: This is a quick, two-player game. The hubby and I played a best-two-out-of-three round and were pretty equally matched. It’s fun and I can see us playing it again from time to time, but it would probably get repetitive if played too often.

Year Released: 1978
Objective: Be the last player with marbles on the board.
Description: The board is made up of two layers of criss-crossed plastic slides with holes cut out at various points. Players take turns placing marbles on the board until all are placed. Then they take turns sliding the plastic pieces which drop the marbles into the pit below.
Rating: * * *
Comments: Stay Alive is similar to Isolation, but can be played with up to four people. I loved this game as a kid and it holds up pretty well. I think if you played it too often, you would learn the pattern of the slides and it would be become repetitive, but it’s fun to play once in a while. It’s a neat concept. 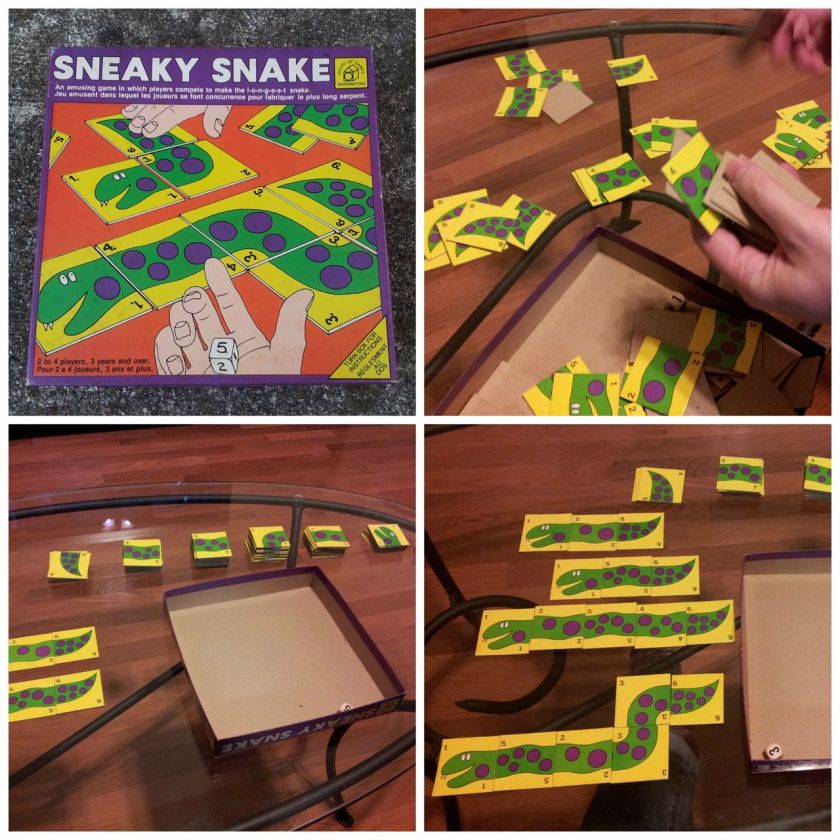 Year Released: 1976
Objective: Make the longest snake.
Description: The snake parts are labeled. Heads are #1, tails are #6, and various middle sections are #2, 3, 4, and 5. You have to roll a 1 to start a snake. Then you roll for middle pieces. As soon as you get a 6, your snake is done. Then you have to roll a 1 to start a new snake. You can’t work on more than one snake at a time. When all the pieces are used, the player with the longest snake wins.
Rating: *
Comments: The first thing I said when we opened up Sneaky Snake was, “Wow. This one looks brand new!” It turns out, there was a reason for that. It hate to say it, but Sneaky Snake stinks. It was so boring, we didn’t even finish playing. However, I will say that if you ignored the rules or made up your own, it could possibly be fun. Also, my cousin has this game too and her four-year-old daughter loves playing with the cute pieces. It’s just not a winner for adults.

Year Released: 1975
Objective: Be the first player to put together an entire skeleton with no body parts left over.
Description: Spin the spinner, collect the body part shown, and construct a skeleton. You can also steal unconnected body parts from other players or, if necessary, give parts to players if you have extras you need to get rid of. It’s a pretty simple game. Or it would be if it didn’t GLOW IN THE DARK! (You totally didn’t see that coming, did you?) Either wait until night time to play or find a nice dark closet.
Rating: * *
Comments: Mostly Ghostly would be almost as boring as Sneaky Snake if it didn’t glow in the dark. But it does, so that makes it kind of fun. It was entertaining to play once, but I don’t see it making a regular appearance. Also, if you’re going to play, don’t forget you have to charge it up first in some bright light.

Year Released: 1981
Objective: The zoo animals have escaped from their cages! Round them up and collect the reward money. The player with the most money at the end wins.
Description: Even Elephants Forget is a combination of a basic roll-the-dice-move-your-player-piece board game and memory. You move around the board based on dice rolls and when you arrive at an empty cage you get to search for the missing animal by drawing one of the memory cards. If you find the animal, you collect the reward money. But if you get it wrong, everyone else sees the card too and then it’s a race to get to that animal’s cage before you forget where it was hiding.
Rating: * * * * *
Comments: I loved this game! We’ve played it twice now, once with four people and once with just the two of us, and it’s been fun both times. I used to love playing Memory, mainly because I was so good at it. In second grade, it rained a lot, which meant we had “indoor recess” a lot, which was just staying in the classroom and playing games. After a while no one would play Memory with me anymore. (I like to think it was because I was unbeatable, but it was probably because I was both unbeatable and a sore winner. Oops.) So I thought I would be a champ at Even Elephants Forget. But no. Apparently age has taken its toll on my Memory skills because I cannot remember where those dang animals are! There is even one card that says “Hole in your pocket—Lose 1 dollar” and I drew it TWICE. Sigh. Despite losing, I loved the game anyway, which shows that I’ve come a long way since second grade.

[The following miscellaneous games are ones I rescued but didn’t play.] 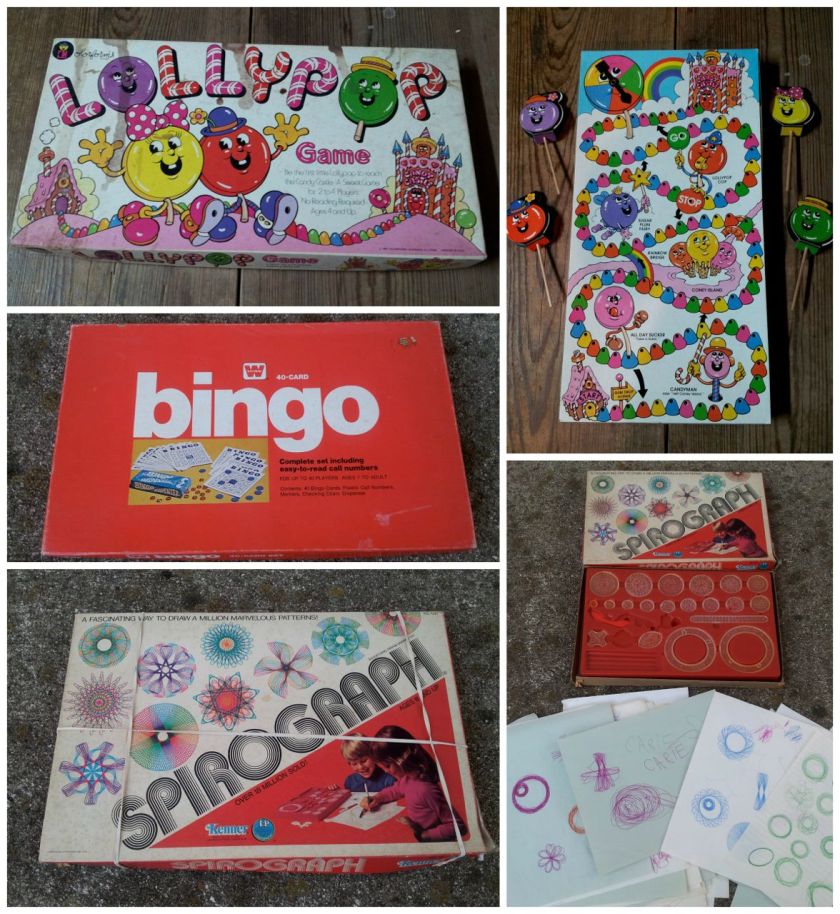 Year Released: 1981
Objective: Reach the Candy Castle first.
Comments: I enjoyed playing this as a kid, but couldn’t see the hubby wanting to relive it with me, so I gave it to my cousin and her daughter. I hear it was a big hit.

Year Released: 1976
Objective: Make a bunch of crazy shapes.
Comments: Spirograph is not a game, so we didn’t play it. I do plan on making some more awesome Spirograph art one of these days (I’m certain I can do better than when I was four) but I decided not to open that can of worms just yet. It looks like something that could consume many hours.

Year Released: ?
Objective: Get BINGO!
Comments: Um… it’s Bingo. Not a whole lot else to say. I didn’t actually mean to grab this game, but it ended up in the stack. 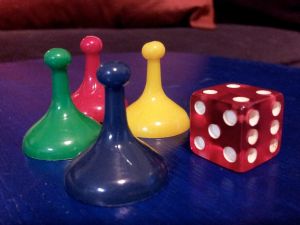 This is only half of the games I brought home!
Stay tuned for results about Laser Attack, Pay Day, All the King’s Men, Uno Wild Tiles, Pokeno, Gomony, and the Garfield game coming soon.

6 thoughts on “Blasts From the Past: Board Games From My Childhood, Part 1”