The internet gets a bad rap. People are always talking about what a time suck it is and how “these days” we have such difficulty staying away from distractions. While I agree that it’s easy to get lost in social media, educational blog posts, and cute pictures of puppies, the interwebs are not solely responsible for the downfall of humanity. People have always struggled with focus.

I recently read a short story by Bram Stoker called “The Judge’s House.” It was written in 1891. This is how it starts:

“When the time for his examination drew near Malcolm Malcolmson made up his mind to go somewhere to read by himself. He feared the attractions of the seaside, and also he feared completely rural isolation, for of old he knew its harms, and so he determined to find some unpretentious little town where there would be nothing to distract him. He refrained from asking suggestions from any of his friends, for he argued that each would recommend some place of which he had knowledge, and where he had already acquaintances. As Malcolmson wished to avoid friends he had no wish to encumber himself with the attention of friends’ friends, and so he determined to look out for a place for himself. He packed a portmanteau with some clothes and all the books he required, and then took ticket for the first name on the local time-table which he did not know.”

See? Over a hundred years ago, this character took a train, alone, to a town he didn’t know, then rented an old abandoned house which local villagers claimed was haunted, all in a desperate attempt to escape distraction while he studied. Of course, this decision worked out very poorly for Malcolmson in the end, so I suggest using these less severe methods for keeping yourself on task.

No, not actual self control. Everybody knows that doesn’t work and I have an empty bag of Milanos in my trash can to prove it. I’m talking about the app. SelfControl is a free app for Mac that allows users to block distracting websites for a certain amount of time. You control the websites and the length. So if you’re doing research and need some internet access, that’s fine. You can still block Facebook, Twitter, Goodreads, or any other urls that frequently try to grab your attention. I find it very useful and usually set it for an hour or hour and a half block.

Sometimes shutting off the internet isn’t enough because the distractions aren’t in the computer– they’re in your own brain. (The call is coming from inside the house!) Sometimes you’re working on a project and you’re really in the zone and it’s going great and you’re getting so much done and all of a sudden your brain is like, “Wait! Oh my god, I just had the BEST idea! What if…” and then she proceeds to tell you the basic plot of a novel that would absolutely 100% be a bestseller. When this happens, it’s temping to stop what you’re doing and just type up a few words of it, maybe a rough outline, so you don’t forget. Don’t do that! It’s a trap! If you go down that rabbit hole, the next thing you know it’s two o’clock in the morning and you’re stuck in the middle of a chapter of THE WRONG NOVEL. No. Don’t do it. Then again, simply ignoring her isn’t a good idea either because, damn it, Brain’s really onto something this time. So here’s what you do instead: 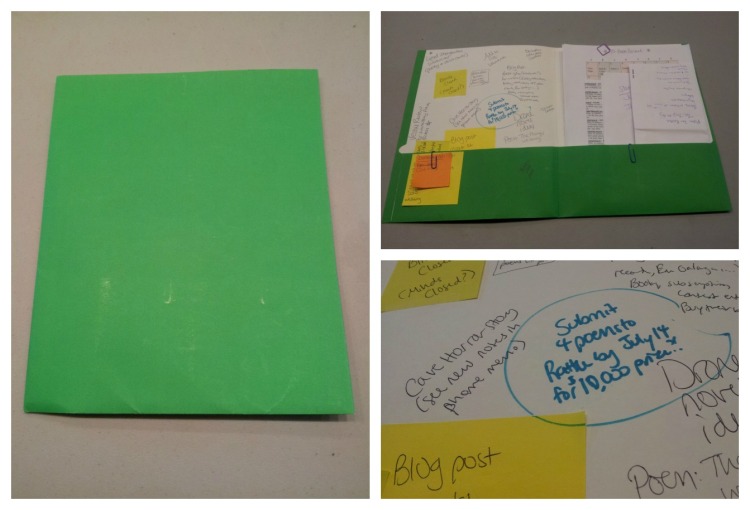 I think it’s important that this is a physical folder in the real world and not one on your computer. Computer files are too easy to access when you’re looking for somewhere to stray while typing and it’s a lot more satisfying to close a real paper folder than to click the red x of a digital one.

Of course, the folder shouldn’t stay closed forever. After all, there’s some good stuff in there. Set a timer on it the same way you do with the SelfControl app. My green folder is closed for the month of June while I work on my novel revisions. It’s accumulating everything from poem ideas to possible blog posts to flyers about future writing contests to… I don’t even know what anymore. On July 1st, I get to open it and see what’s inside. It’ll be like my birthday!

Malcolmson actually had a pretty good idea in “The Judge’s House.” Sometimes turning off the internet and sticking distractions in a folder still isn’t enough to keep you in the chair and writing. Those are the days when a change of setting can do you good. Some people write in coffee shops—that usually works for me for a couple of hours—but if, like Malcolmson, you need a quiet space for a lengthy period of time, the hustle and bustle of your favorite coffee shop may not work.

Luckily, if you live in Austin, Texas, like I do, you don’t have to go to a haunted house to find the perfect place to work because we have The Writing Barn, a unique space operated by Bethany Hegedus, author of Between Us Baxters, Truth with a Capital T, and the Bluebonnet Award Nominated picture book, Grandfather Gandhi.

Situated on 7.5 wooded acres in Austin, Texas, The Writing Barn is surrounded by mature trees, home to birds and deer. It’s a peaceful out-of-town environment without ever leaving Austin.

With floor to ceiling bookshelves, rows of instructional craft books, free wi-fi, and no television, The Writing Barn is the perfect spot for an overnight writing retreat, to host a writing class, or throw a book launch party. 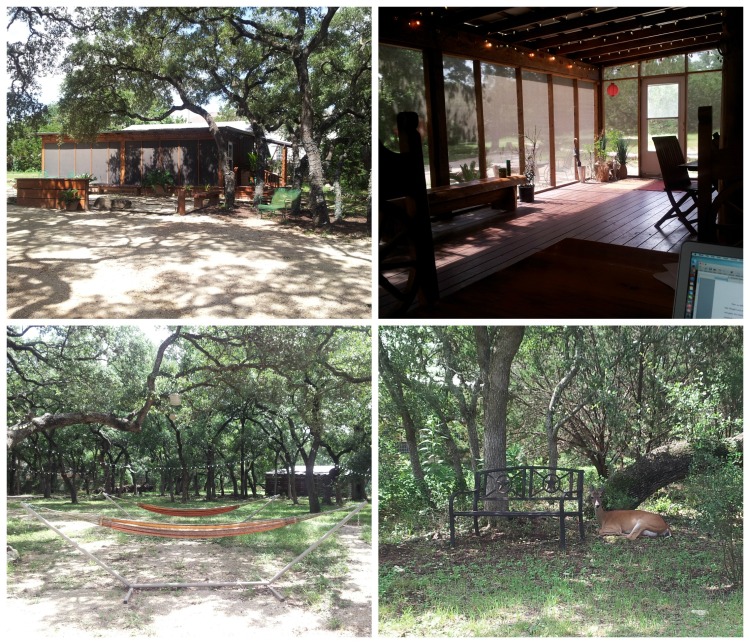 In addition to workshops and classes, the Barn also hosts “Write Away” days where, for just $15, guests can spend the day at the site, enjoying hours of distraction-free* work time among other writers. These days are so great for getting back into the groove if you’ve been away from a project or focusing to get through a troublesome revision or just enjoying the peace and serenity of the surroundings while typing. In fact, I just took part in a “Write Away” day today and I left the Barn with 4,000 revised words of my novel, half of this blog post drafted, and six new friends.

* Okay, it’s not completely distraction free, but baby deer are allowed to interrupt me anytime.

That’s all I’ve got today. Limit the internet with SelfControl, stick your Brain’s brilliant (but ill-timed) ideas in a folder, and find a writing retreat in your area (but good luck finding one as lovely as The Writing Barn). And if you do decide to go off on your own for awhile, remember—safety first. Tell someone where you’re going, take your cell phone with you, and heed the warnings of the local villagers if they say the house you rented is haunted. Because, after all, you’d eventually like to be able to get away from your get-away.

4 thoughts on “Driven to Distraction: How to Avoid Losing Focus When Writing”