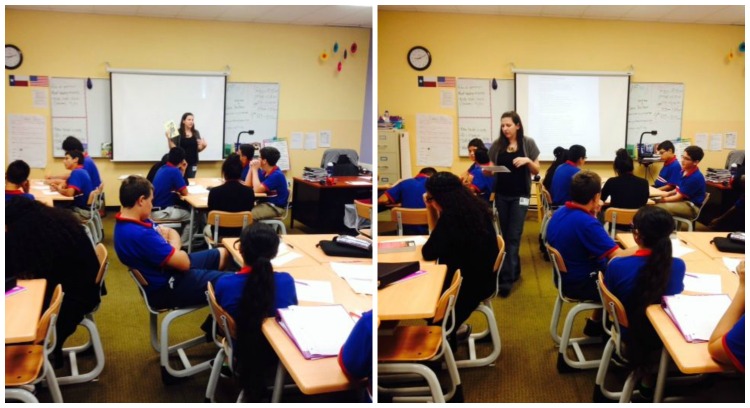 This past Friday, I drove up to the Harmony Science Academy of North Austin to be a guest speaker in an eighth grade poetry class, and it was a blast. I’d never been a guest speaker before. I’d hosted guest speakers in my own classroom and been to see plenty of them at bookstores and libraries, but actually being a guest speaker was new to me, and I enjoyed it immensely. It was fun being back in the classroom but not in the role of the teacher. I had the freedom to talk about whatever I wanted (within reason) and behavior problems (of which there were none) were not my responsibility.

The students were polite as I introduced myself, read some of my poems, talked about my writing process, and led them in a short activity on found poetry, but they were also sleepy. It was eight o’clock in the morning, after all, a time when kids needs more than a few lines of verse to wake them up. I knew this going in, so I brought along something to help: my Magic 8 Ball.

The kids were not immediately enamored with the Magic 8 Ball, but they warmed up to it eventually and got bolder with their questions. At first, to get them going, I allowed them to ask their questions silently and then gave them the answers. In retrospect, this might not have been a good idea, as some of the boys got very mischievous looks on their faces when they said they had their questions ready. Luckily, the Magic 8 Ball was really on its game today and answered most of those boys with, “Better not tell you now” or “Cannot predict now.” I told them that meant their question was probably inappropriate and the 8 Ball refused to answer.

Some of the questions the students asked the Magic 8 Ball:
– “Am I going to be a millionaire?” (Reply hazy try again)
– “Am I going to end up in detention this year?” (Outlook good)
– “Am I ever going to pass the STAAR test?” (Yes definitely)

Some of the questions the students asked ME:
– “How do you rhyme so easily?”
(I asked him what made him think it was easy? I told him how much work goes into rhyming poems and how much I rely on rhyming dictionaries to help me.)
– “Does your cat have a human personality?”
(I told him if my cat Toby was a human, he would be a clingy toddler.)
– “What age do you want to die?”
(I told him that was a very strange question but probably a good topic for a poem and that I prefer to be surprised.)

All in all, it was a good experience. I hope the kids got something out of it.

When I got home from being a guest speaker and collapsed on the couch for a nap (because, after two years out of the classroom, teaching just one class exhausts me) I let my mind wander back to some of my favorite poetry-teaching moments with my seventh graders. It landed on three infamous instances of misspelled words, and I woke up laughing.

The first two are fairly common actually, but they still make me laugh. The last one is my all-time favorite misspelling.

1) Sometimes good spellers write too fast and leave out letters on accident. Sometimes they are very smart, very sweet, very innocent girls who would never in a million years write something inappropriate on a paper. Sometimes the letter they leave out is the letter R and the word they leave it out of is SHIRT. I once had a very sweet, very smart girl in my class who wrote a poem about a spill and how she had to wash her sh*t.

2) I once had a boy write in his “Where I’m From” poem, “I am from dancing and raping when no one is around.” I asked him, rather hopefully, if perhaps he meant “rapping.” Fortunately, he did.

3) My all-time favorite misspelling came from a boy I taught in 2009 who actually became one of nine students in my class that year to have poems accepted for publication.

Z was a smart guy and a good poet, and, thankfully, he also had a good sense of humor. In his “Where I’m From” poem, which was not the one he got published but was still very good once he corrected his errors, he wrote, “I’m from my childhood swing set, where I once hung suspended by my witty titties.” ? Honestly, I just didn’t even know what to do with that.

I called Z over to my desk and asked him quietly, “Um… what does this say?”

Z looked at the line and said, “where I once hung suspended by my whitey tighties.”

At that point, I had the pleasure of telling him, “Ok, well you’ve got some misspelled words here. First of all, this word is ‘witty’ not ‘whitey’ and this word here, well this word rhymes with witty.” It took half a second for the meaning to sink in, and then Z’s face blushed to purple. He fixed his mistakes and went back to his table, and a couple of minutes later I was happy to hear whispering and then laughter. If you can’t laugh at your own mistakes, life will be dull indeed.

I still can’t think about Z and his witty titties without smiling.  🙂

I want to express my gratitude to the Harmony Science Academy for inviting me to speak to their poetry class and to the Austin Poetry Society for being the gateway to my first guest appearance in a school. I sincerely hope it is not my last. I also want to thank every student who has ever brightened my day with a hilarious poetic misspelling.