“The Other House” was first published in 2016 in Under the Bed, Volume 4, #6. Since the digital magazine is no longer available, I’d like to share the story here.

The idea for this tale came from my friend’s three-year-old daughter who used to talk about the “other house” she had. She was quite convincing about this alternate home, and it got my imagination going. I like this story because it’s not meant to scare kids… it’s meant to scare parents. Enjoy! 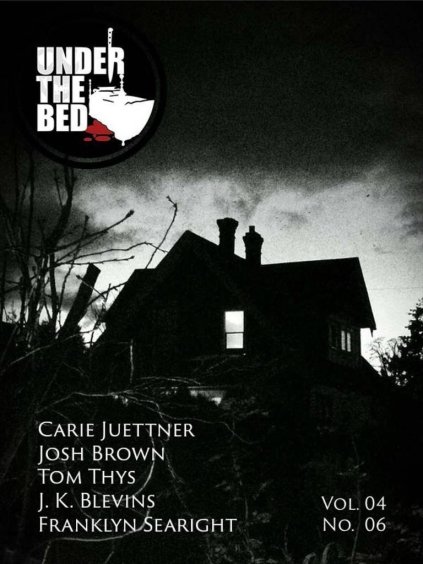 Dee’s parents laughed when she first mentioned her “other house.” After all, she was only two and had never lived anywhere else. They encouraged her creativity, asking questions, but Dee was pretty vague on the specifics.

“I go there sometimes,” she said, while staring out the window from her car seat.

When Dee turned three, her vocabulary grew, and with it the descriptions of her other house. She talked of a bedroom with blue walls and white carpet. She described a bed with curtains at the top.

Dee’s parents thought their daughter’s imagination was cute. They thought it showed intelligence to be making up stories at such a young age.

“She comes up with the funniest things,” Dee’s mom told a coworker. “Pictures she describes, little bits of songs we’ve never heard before.” She shrugged. “I mean, I guess she could be picking this stuff up at daycare, but it’s so detailed.”

There was something to Dee’s stories that gave them a sense of accuracy—something in the way she held her little hands to demonstrate the size of the blue stool she swore she stood on to brush her teeth, something in the way she enunciated her imaginary friend’s name. GEN-E-VIEVE. There were definitely no Genevieves at daycare. It was not surprising that Dee had imaginary playmates, but that she’d created such a vivid setting for them to exist in. When asked where these friends were, Dee looked people straight in the eye and said, “my other house.”

Dee’s parents smiled at each other and marveled at their remarkable child.

“It’s just a phase,” Ms. Zenia told Dee’s mom. “Many kids have rich imaginations at this age. It’s nothing to worry about.”

“But, it’s just… she’s four now, and she’s been talking about this house and these people since she was two.” Dee’s mom blushed, knowing how insubstantial her argument sounded. She tried a different tack. “Dee’s just so obsessed with this place. The other day, she wanted her purple giraffe. Well, she doesn’t have a purple giraffe, never has. But Dee had a fit. She started saying, ‘It’s in the other house! I left it in my other house!’ It was the biggest tantrum we’ve ever seen. I tried to calm her down with the yellow monkey she loves, but she wasn’t having it. It took everything in my parent arsenal to get through that one. You don’t think, I mean, she doesn’t have… psychological problems? Does she?”

The Pre-K teacher smiled. “No, you don’t need to worry about that. She interacts with others, she makes eye contact, she’s an excellent conversationalist. I honestly don’t see anything to be concerned about here at school. Is she sleeping okay?”

“Oh yes, fine. Dee’s a great sleeper. That’s one way we lucked out as parents. She’s been sleeping through the night since, well, since before she was even a year old. I used to think about waking her up to check on her, but I never did. My friends told me enough horror stories about how hard it is to get kids back to sleep, so I’d just watch her breathe to make sure she was okay.” Dee’s mom wrung her hands. “I guess I’m a worrier.”

Dee’s dad felt the engine of his work truck shudder. Come on, he thought, get me home and then you can die on me. Right then his cell phone chirped to let him know it was running on empty as well. Damn it. He’d forgotten the charger. He picked up the phone and called his wife.

“Everything okay?” she asked.

“Probably. But this last run took longer than I thought and now the truck’s acting funny. Phone’s dying too. I think I can make it home, but if I’m late, don’t worry. It just means I’m walking to a gas station or waiting for a tow truck.”

“Walking to a gas station? Where are you?”

“About forty miles from home, I think. I’ll be fine.” He knew she would worry, but he didn’t want her to.

“It’s almost eleven o’clock, and it’s supposed to rain. I don’t want you walking on the side of the highway. It’s not safe. You could be—“

“Of course. She’s been out like a light since seven. She’s sleeping so soundly. I felt her forehead and it seemed kind of hot, but I don’t know. She was asking for her frog pajamas again earlier.”

“She doesn’t have any frog pajamas.”

“I know, that’s what I told her. But of course she swears she has them at her ‘other house.’ I’m beginning to really hate that place. I think she likes the people there more than us.”

“She’ll be fine.” He could practically hear his wife wringing her hands. His phone beeped again. “I will too, but I’ve got to go.”

Dee’s dad turned the phone off and chewed on his thumbnail. It had started to rain. He’d told his wife he had to make this run tonight, but that wasn’t true. He’d volunteered for it. The extra money was nice, but what he really needed was a break from the bedtime routine. He loved his daughter. God how he loved her. But it bothered him the way she interrupted his bedtime stories with tales of her own. They were nothing particularly special, but the glee with which she shared them made them seem magical. Whenever he asked where the stories came from, her answer was always the same. “My other house.”

It was ridiculous, he knew, to be jealous of an imaginary place, to feel left out of his little girl’s bedtime stories. But he did.

The engine shuddered again. He looked out the window at the dark stretch of highway and decided his wife might be right. Maybe walking wasn’t such a good idea. He took the next exit and turned into a quaint little neighborhood. His truck made it half a block before dying completely. The phone quickly followed suit.

He got out of the truck. Thankfully, the rain had stopped. In fact, the sky had lightened considerably. He decided the moon must be extra full behind the bank of clouds. He walked up the sidewalk, looking for a house with lights on. He didn’t want to scare anybody, just needed to use their phone and ask them where he was. The neighborhood didn’t seem to have street signs and the numbers on the curbs were too faded to read.

At the end of the street he came to a one story brick house with the porch light on and warm light spilling out from two of the front windows. There was a small bicycle in the front yard, making him wish he were home with his daughter. Dee had been begging for a bike. He suddenly regretted not getting her one for her fifth birthday.

A woman answered the door when he knocked. She wore jeans, a faded red sweatshirt, and a smile. She was wiping her hands on a dish towel. Dee’s dad stood far back from the door as he explained his situation and said he’d be more than happy to wait on the porch if she would just bring him a phone, but she said, “Nonsense,” and invited him in. “Don’t mind the mess,” she said. “You know how kids are. I’ll go grab the phone.”

He was surprised at her hospitality, considering the late hour and the fact that he didn’t exactly look respectable in his dirty work shirt and stubble. But he thanked her and stepped inside. The house felt warm and comfortable, despite the clutter. A dark hallway stretched off to his right, and he could hear a TV on low in a room somewhere to the left. There was a clock on the wall whose battery must have died. It said 5:25. Toys were strewn about everywhere, and without meaning to, he stepped on one. He reached down and picked it up. It was a purple giraffe. He laughed. He’d have to ask the woman where she got it.

She came back then, saying, “Here, I’ll trade you.” She took the stuffed giraffe from his hand and replaced it with a cell phone. Then, seeing that his eyes had traveled to the table of empty plates and glasses half full of iced tea, she said, “Oh don’t worry. You didn’t interrupt anything. We just finished an early dinner.” Dee’s dad resisted the urge to look at his watch, to reassure himself that it was close to midnight. Instead, he just nodded. “I’ll give you some privacy,” she said. “If you need anything, my name is Ginny.”

He stared at her as she disappeared around the corner toward the TV sounds. She must have turned the volume up because suddenly the words became clear. “That’s it for sports. Thanks for joining us. We’ll update you about those rain chances at ten.” He looked back at the clock on the wall. The battery wasn’t dead after all. The minute hand had moved. He looked down at the cell phone. The screen said 5:30. He glanced behind him at the front door. That was more than just porch light coming through the window.

Dee’s dad shook his head and leaned against the wall, suddenly needing support, and tried to catch his breath. From this angle, he could see an open door about halfway down the dark hallway. It led to a small bathroom, where a bright blue stool was tucked neatly beneath a sink. Across the hall, another door stood ajar. Voices, one deep and one childlike, emanated from the room beyond.

Unconsciously, he dialed a number on the phone. His wife picked up immediately. “Hello? Who’s this?”

“Me,” he said as he inched toward the open door.

“Yeah. Truck broke down. Calling from a house.” He tiptoed on the white carpet, past a child’s Crayon drawing framed on the wall.

“Is a tow truck coming? How are you getting home?”

“I don’t know.” He reached the room and slowly poked his head around the doorframe. The walls were painted blue, and there was a small bed with a pink canopy. It was empty. He leaned farther. “Is Dee still asleep?”

“Like the dead. Why? Do you think I should wake her up?”

Beside the bed, a man sat in a rocking chair reading a picture book. In his lap, smiling and laughing and wearing frog pajamas, was a little girl. His little girl. Dee.

He pressed his back against the hallway wall, heart pounding. “No. Don’t wake her up.”

From inside the room, he heard the man’s voice say, “Honey, I’ve told you. We don’t have a yellow monkey.”

6 thoughts on “The Other House”