I’ve recently started substitute teaching. I taught seventh grade for thirteen years, and I currently work part time in an elementary school library, but subbing is a whole different ballgame.

Schools are in desperate need of subs. When teachers get sick or have to stay home with a sick child or go out of town or just need a vacation day to themselves (which they deserve), they can’t just push their to-do list to the next day or decide to work over the weekend to make up for the time off. They can’t even ask a coworker to cover for them. No matter what emergency comes up in a teacher’s life, there still has to be a warm body in that classroom the next day taking care of those kids. Preferably a capable, responsible, patient body excellent at multitasking, quick-thinking, and improvisation.

When a teacher is out and doesn’t get a sub, those kids still have to be monitored by someone. Sometimes the class is split up and kids go to other classrooms to do busywork. Sometimes an aide covers the class, leaving the students she usually aids unaided. Sometimes (this is what my former school did) various teachers are pulled during their precious “off” periods to cover the sub-less class.

[Note: There is no such thing as an “off” period. It’s a myth. There is only the conference period, the meeting period, the ARD period, the respond-to-parent-emails period, the track-down-that-kid-who-owes-you-work period, and the rare but glorious finally-go-to-the-bathroom-and-then-grade-papers period.]

Back then, I didn’t like subbing. I wanted to help out my fellow teachers, but I resented the time away from my own work and couldn’t get past the “all the things I could be doing” mindset.

Now though, I’m ready. I’m choosing to sub and I’m getting paid for it and I’m no longer a stressed-out, full-time teacher with a million other things I should be doing. At least, I thought I was ready. As it turns out, I don’t know ANYTHING.

The Disadvantages of Not Knowing Anything

I’ve only subbed three times so far—once at a high school, once at a middle school, and once at an elementary. All three were campuses I’d never been to before. So I got lost. A lot. And there were other surprises too. Based on my experience so far, every sub job is an adventure.

I arrive at noon and immediately realize I have a problem: I don’t know where to park. This isn’t an issue at middle schools and elementaries. There’s one parking lot, and it’s for adults. Easy. But high school kids DRIVE, which is scary. There’s a teacher lot (must have sticker), a student lot (must have sticker), and a visitor lot (must not stay more than thirty minutes). Hmm. I park in the visitor lot, planning to ask someone in the office what I should do. Surely they will tell me the visitor spot is fine for today and let me know where the sub spaces are for next time.

I’m parked. Check. Now I just need to enter the building (easy) and go to the office (easy). Except it isn’t easy. This school is weird. It doesn’t have an obvious entrance. The first door I try is the band hall. The second door I try is locked. The third door I try gets me inside, but there’s still no sign of the office. Nor a sign FOR the office, which is odd. I find an adult who points vaguely and mentions stairs and something about “left” before hurrying past me. She looks stressed. So I go vaguely left in search of stairs. The hallways are empty. Eerily so. There are no students milling about, no one at a locker, no ruckus coming from the closed classroom doors. I start to get a strange feeling.

Soon, I come upon a few more people—all adults, most carrying walkie-talkies, including one school resource officer. They also look stressed. I ask a woman if I’m on the right path to the office and she points to some stairs. Then I notice her watery eyes and ask if she’s okay. “Yes. It’s been a rough morning.” Hmm. The odd feeling begins to grow. To get to the stairs, I pass the cafeteria. Through the windows, I finally see students seated at a table, talking to another cop. Hmm. When I get to the top of the stairs, a man is sweeping up a large pile of confetti. We make eye contact. I ask, “Is everything okay here?” He says, “No. Don’t go near the cafeteria.” Hmm. At this point I’m wondering if I should make a run for it.

But then I make it to the office, and suddenly everything seems normal. There are ringing phones and steaming coffee cups and women typing and joking with each other. It’s like I stepped out of the Twilight Zone and back into the real world. I decide to stay. I sign in, chat with the receptionist, and find out where the library is. Just before I leave, I remember to ask about parking. “The visitor lot? Oh no, you’ll have to more your car. You can use… let’s see… space 67… or 71… or anything from 88 to 92.” She writes them on a sticky note and hands it to me. What? How are subs supposed to know this stuff?

After that, everything goes fine. Eventually I find out that the Twilight Zone incident was due to a pep rally that got a little out of control. Students had been sent back to their rooms while the perpetrators were being disciplined in the cafeteria and the school was in a small, semi-locked-down state when I arrived. Lucky me! 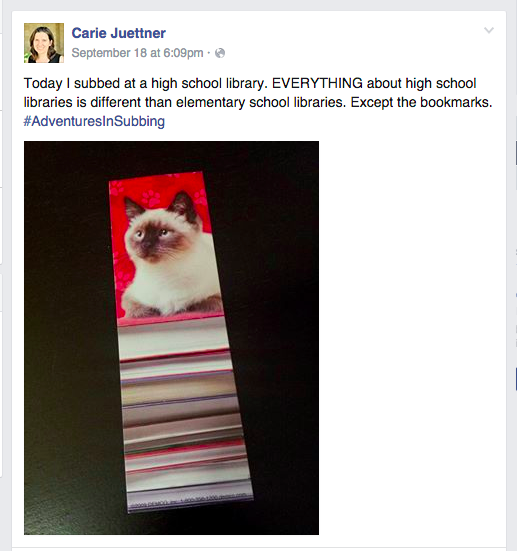 I’m at a middle school and, once again, I can’t find the front door. This time there are kids everywhere and one gives me directions (bad ones). Then another one walks me around the school to where I need to be. There I find the front door, but it’s locked. I look for the doorbell (most schools have one these days for security) but there’s no button. I look for an adult amid the sea of students milling around outside. No adults. Again, the Twilight Zone feeling begins to creep up on me.

I stand by the door for a few minutes, feeling like an idiot, wondering if this really is the front door or if the sweet student led me astray, until another sub walks up. When I ask her how to get in, she informs me that we just have to wait until someone comes and opens the door. Ah. That makes sense. Eventually a teacher arrives and we follow her in, closing the door behind us and shooing the students out like a restaurant owner shoos cats away from the kitchen.

I check in at the office and learn I’ll be teaching in a portable. I have no idea where the portable is. The nice man in the office takes me and another sub on a “tour” of sorts. When we get to the outdoor courtyard area (did I mention the school is huge?) he points to several long rows of portable buildings and tells me the number of mine. “Will it be unlocked?” I ask. Probably not. “How do I get in?” He says he’ll call someone to open it. Oh. That makes sense. I set off past the guys wearing hardhats (did I mention the school is under construction?) to my portable. Which is locked.

I stand outside. It’s a lovely morning. I look around. A man is walking randomly between the portables. He isn’t wearing a staff shirt. He doesn’t have a school badge. I make a mental note of him in case he’s a miscreant. Then I wait some more. I read my sub folder. It says I’m supposed to pick up my first period class at 8:05 in the gym. It’s 7:55. I hear a voice. “Do you need in that room?” It’s the miscreant. “I have a master key.” Hmm. The miscreant has a master key to the school. This can’t be good. Or maybe it can. Anyone with a master key has to be official, right? He lets me in. Immediately, an alarm starts going off. He says, “Oops.” Now I wonder if I’ve just aided and abetted a miscreant breaking into a school portable. He darts inside, finds the security system, punches in a code, and the alarm stops. “Whew! It’s the same code as my room.” I decide he’s probably not a miscreant. It’s now 8:00, almost time to pick up my students in the gym. I have no idea where the gym is. It dawns on me that no one else ever came to unlock my room…

After that, everything goes fine.

This time I’m ready. I’ve never actually been inside the school, but it’s right by my house. I drive past it all the time, and I know it has a very obvious entrance and only one parking lot. I’m confident that I can handle three and a half hours in a classroom of 8-year-olds. Then, the night before the job, I get a text from the teacher I’m subbing for. By the way, tomorrow is FIELD DAY! Wear comfy clothes and sneakers. You’ll be doing two hours of stations and then a video! Of course. And, wouldn’t you know it, when I get there the next day, the parking lot is closed for Field Day, so I have to drive around the neighborhood looking for a place to park.

After that, everything goes fine.

Except I still don’t know anything, including the students’ names. So, during the pogo stick and stilts station (where, miraculously, no injuries occur) when I need to get the attention of the third grader wielding his pogo stick like a sword, I say, “Hey you!” Nothing. “Hey you in the…” and that’s when I realize they’re all wearing the same shirt. For Field Day. Duh. So I end up saying, “Hey you pretending that pogo stick is a sword! Quit it.”

And then everything goes fine.

Except the video doesn’t work.

It’s true what they say. Subbing is never boring. Especially when you’re just starting out and you don’t know ANYTHING.

However, there are also some advantages to not knowing anything. Stay tuned for PART 2 of Adventures in Subbing tomorrow.

9 thoughts on “Adventures in Subbing, Part 1: The Disadvantages of Not Knowing Anything”