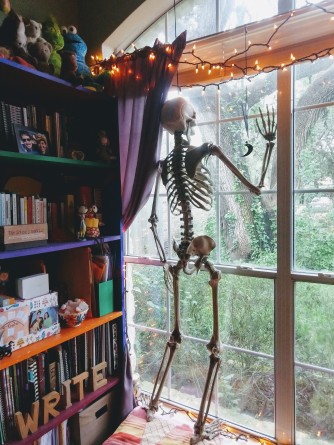 It’s the last week of October, and this is the first blog post I’ve written this month.

If you’ve been worried about me and wondering why I haven’t been bombarding your inbox with creepy stories, strange decorations, and a general, 24/7, over-caffeinated zeal for all things Halloween, thank you for your concern, but fear not. I’m alive and well and currently sitting in a room with not one, not two, but THREE skeletons. And one dog. And a gnat that keeps landing on my face and driving me crazy.

I realize it’s not normal for me to take my favorite month off from blogging, but really, nothing about this October has been normal.

It all started when our hardwood floors exploded. Not exploded exactly. They… grew. Actually, it was more like they swelled up, but I hate the word “swell” (*shudder*) so I’ll use expanded. But that doesn’t sound right either. Let’s put it this way: Over the course of four days, the terrain of our beautiful hardwood floors metamorphosed into hills and valleys and mountain ranges that made it look like the monsters from Tremors were living under our living room. So that was fun. Then a parade of well-meaning professionals came to our house, measured things, scratched their heads, measured more things, and said, “That’s not normal.”

We are still in process of figuring out exactly what kind of monster is haunting our house.

Then there’s the rain. I live in Austin, Texas. In case you’re unfamiliar, we’re known for our music, our tacos, and our dry spells. There are restaurants here that serve 100¢ margaritas when the temperature hits 100 degrees, and they often do a pretty good business even in September. Fall usually arrives in late October with the first real cool spell blowing in around Halloween.

But this year… it’s been raining. A LOT. And on October 15th, the temperature dropped into the forties and stayed there for a couple of days. And then it rained some more. It’s still raining. In fact, it’s rained so much that the water treatment plants can’t keep up, and we’re now having to boil our drinking water to get the demons out.

I’m telling you, this October is weird.

So one night, when it stopped raining for a few hours, I went out into the front yard and started setting up a cemetery (because there’s nothing creepier than seeing your neighbor hammering tombstone stakes in the dark).

It turned out pretty well. Except for these folks… 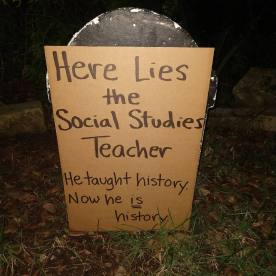 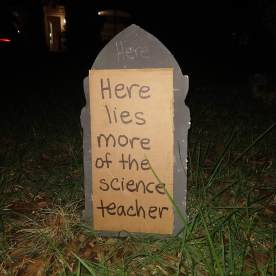 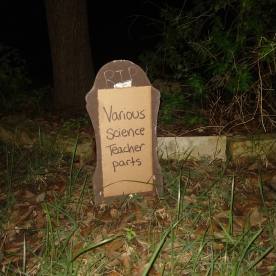 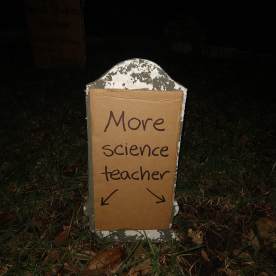 Once the yard was sufficiently creepy, I decided I couldn’t let my ruined hardwood floors ruin my Halloween indoors*, so we got a new roommate, and he livened things up a lot.

Now I’m ready for my favorite holiday, and I have the empty candy wrappers in my trash can to prove it. The yard is decorated, the house is decorated, and my costume is coming together. There’s only one thing left to do: decorate my blog.

Expect a few treats headed your way over the next week. Better late than never.

* I swear I did not realize that rhymed until after I wrote it.